The first Porsche vehicle ever was the P1. For all intents and purposes, it was an electric motor equipped horse-drawn carriage. It would take over a century before the Tesla Roadster appeared in 2008 — the Lotus Elise-based roadster would be the world's first production performance BEV. Over a decade later, it seems we are still in the nascient stages of performance battery electric vehicles.

When I started thinking about forming Emotive Engineering, I was largely influenced by two videos. The first was Ken Block hooning the RTR Mustang Mach-E 1400. The second was seeing a Mountain Pass Performance-equipped Model 3 Performance throw down a 1:37.5 at Laguna Seca. That time is seconds ahead of any time I have run at my local track and this was done by a driver from Canada! The video was from a pre-COVID world and I have to think with development it could go even faster.

I have had a Porsche Taycan and Rivian R1T on deposit, but it made sense to think about what Emotive Engineering wants to be and who the customer base is. In the end, the choice for a shop car may have been obvious — but as an engineer it is important to consider all options.

As a kid I had a Porsche ad hanging in my room that read "I love the smell of asphalt in the morning". As a performance car junkie it is hard not to follow what Porsche is building. The Porsche SUVs and sedans have been derided by Porsche purists, but they have certainly helped the company stay afloat. For enthusiasts who have criticized Porsche for “brand dilution” we should be grateful. Porsche makes upwards of $17,000 per car. If you have ever used Porsche’s configurator you know those option costs rack up fast. The number of SUVs that Porsche moves every year allows them to build halo cars that we will admire but never be able to afford.

The Tesla Model S certainly caught Porsche's attention. A big luxury sedan was taking on the Panamera market. Three years after the release of the Model S, Porsche brought the Mission E concept to the 2015 Frankfurt Motor Show.

In 2019, the Porsche Taycan Turbo and Taycan Turbo S were introduced to the masses. Despite the Turbo nomenclature, the Taycan featured dual AC synchronous electric motors to the tune of 671 all-wheel drive horsepower and 751 horsepower, respectively. The Turbo's 627 lb-ft of torque propels the Porsche to 60mph in a manufacturer reported 3.0s and The Turbo S in 2.6s. Road and Track did the deed in 2.4 seconds.

With drag racing not exactly being my cup of tea, I honed in on reviews of the Taycan on track. It is no surprise that a sedan weighing over 5000 pounds is not exactly light on its feet and that energy consumption is very high. My intentions with any shop car would be to do weight reduction where possible and this feels just plain wrong on a luxury sedan of this caliber. To top it off, there was one thing that really caught my eye as a no go. According to commenters on TaycanForum, Porsche does not allow you to completely disable power regeneration/recuperation completely. This means braking is always slightly compromised, however slightly.

As mentioned before, I had a Porsche Taycan on deposit. A couple of months ago my local dealer called to inform me that a previous employee had not organized the deposits particularly well and my spot in line had come up without me being notified. They gave me the option of taking the next slot or getting a refund. This car was to replace our current family sedan and commuter car. Even the base Taycan is Picking up a quickly depreciating $90k base model car after options all while starting a brand new business is not exactly the most savvy of decisions.

A Taycan in Audi clothing, the e-Tron GT shares Volkswagen's J1 BEV platform and 800V architecture. The lightning fast charging is already ahead of what most chargers are capable of today. The e-Tron GT is worth a mention but the paper statistics already put it behind the Taycan. The base price of the non-RS is in the six figures and Audi says the sprint to 60 takes 3.1 seconds for the RS model. This puts it at a disadvantage to the Porsche in acceleration with not much of a price discount. 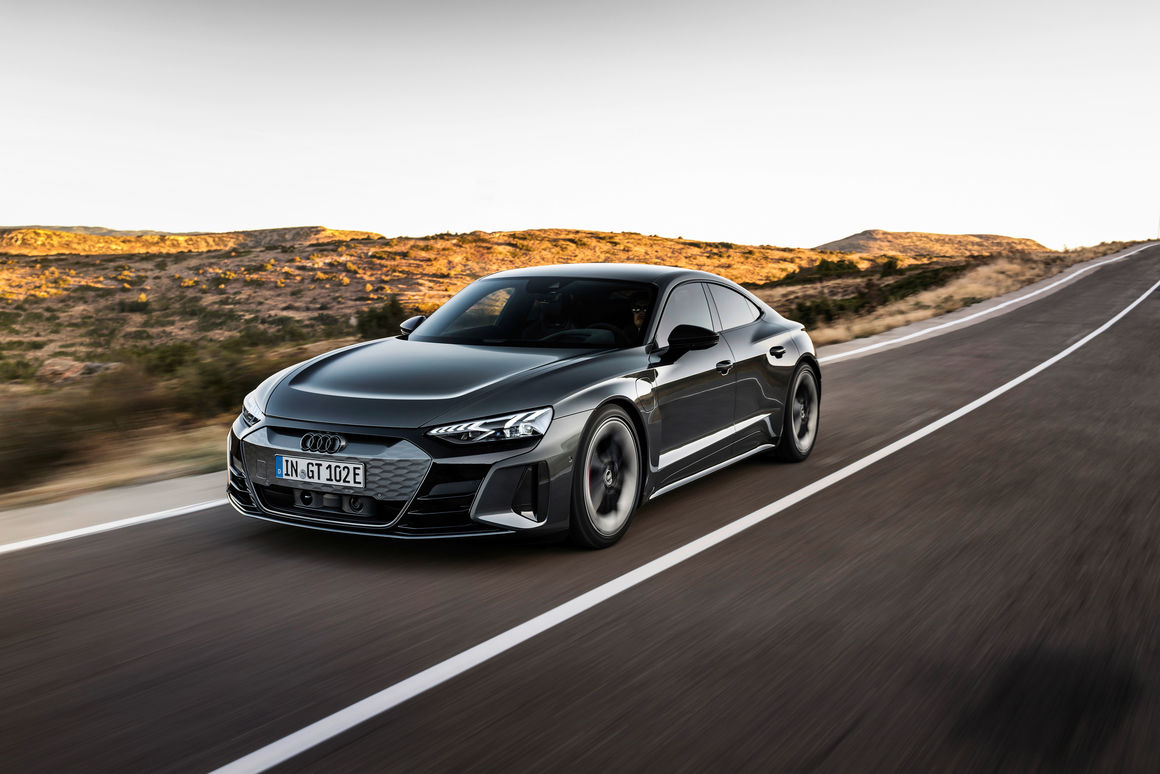 Aside from not being the peak performer, the RS e-Tron GT is still far too pricey for a shop car. If I had the means to replace my family cars with the Audi as a daily driver, the muscular looks and sleek styling would certainly find its way to my garage.

If there is one thing Ford has done right, it is marketing their electric fleet. The RTR Mustang Mach-E 1400 drift missile set YouTube on fire and their all-electric Cobra Jet 1400 drag car laid down an 8.128 second quarter mile. Nevermind the fact that the Mach-E 1400 has 5 more motors than the street version of the Mach-E GT and that the Cobra Jet 1400 was not even running Ford motors.

Though I have deep disappointment in the Mustang name being used for a small SUV, I was certainly intrigued by what Ford had to offer. 480 hp and 600 lb-ft of torque, 0-60 in 3.5 seconds, and a dedicated track mode. A $5,000 option on top of the base Mach-E GT, the Performance Edition increases torque by 34 lb-ft over the standard GT, cuts the 60 sprint by 0.3 seconds, and adds Brembos and summer tires. While waiting to see what would happen on release, Reddit mentioned that Ford had many teething issues with the Mach-E. This was to be expected for what is not only a first-year model car but also Ford's first production on this particular platform. Ford has had experience building BEVs with the Focus Electric and I am certainly looking forward to their future offerings, but the scarcity of the Performance Edition and the ride height of the Mach-E ruled it out from consideration.

And now we get to perhaps the most obvious answer. The Tesla Model 3 is the most affordable, most available, and most widely sold "performance" EV on the market. I put performance in quotes because the car itself is meant to be a great every day vehicle that just happens to also throw down great lap times at the track. One of the other considerations when choosing the Model 3 as a shop car is how ubiquitous they are in the San Francisco Bay Area. It seems every few houses on my street has a Model 3 parked in front — and who knows how many are hiding in garages. Ask any of your friends who is a Tesla shareholder and they will tell you the advantages of owning a Tesla. For me it came down to market share and aftermarket support. Tesla started shipping Model 3's in 2018 which gives it a tremendous headstart in volume of cars on the road. In August, the Model 3 passed 1,000,000 units sold. On top of that, every major aftermarket suspension manufacturer has components for the Model 3.

At the end of the day, we are still very early in the world of performance EVs. With a Model 3 Performance on order, we hope to develop more parts and gain expertise on the chassis to spread the love of electric motoring. In the mean time, I can't wait to see what other automotive manufacturers will release in the coming years. The future is electric. The future is now. What a time to be alive!